One of my MasterClass students finished a jewelry box just in time for Mother’s Day.  He’s been working for close to three months on it. 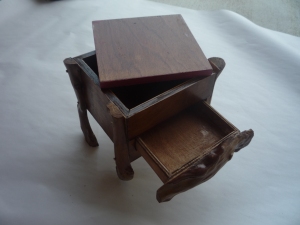 We began with a design consultation, in which we researched various box designs on the web.  I want to give a big thank-you to Andy, an extremely talented and generous woodworker who provided some valuable feedback for my young student.  I greatly appreciate your help Andy.

A walk-through & gallery after the jump..

We began with a small prototype built out of cardboard.  I didn’t take a picture, but I’m sure you can imagine a 5″ cube, with no details.  I sent him back to the design board.  This time, we rooted around the intertubes and found some great features, such as a front drawer and myrtlewood accents.  Then, into the woodshop: 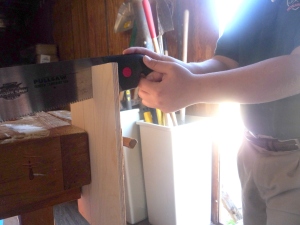 We ripped the various pieces out of 1/4″ plywood and used a miter box to cut the corner joints.  When we’d mark a cut in the plywood, I’d go over the mark with a utility knife, scoring the first layer of hardwood.  This creates a cleaner saw cut.  Once the parts were manufactured (about a month of work), we began assembly. 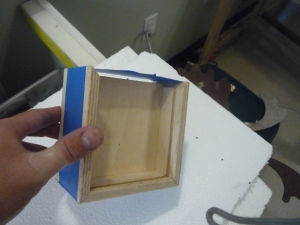 We used blue tape for clamping pressure in glue up.  The bottoms have been fit into rabbets.  I used my personal router for this work. 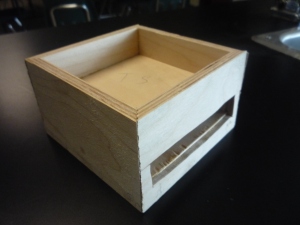 With the carcass assembled (this has taken a month and a half.  About six to eight hours of classroom time) we began fitting the drawer.  We followed the same pattern as before: rip parts out of plywood, use miter box for final sizing, assemble with blue tape as the clamp. 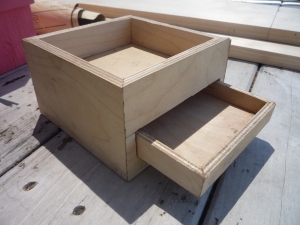 The final fitting of the drawer took nearly two weeks.  The drawer was built about an 1/8″ too big – it took that long to sand right.  With the drawer fitted, it was time to work on the accents.  I split myrtle branches on my bandsaw and the student glued them into the appropriate spots.  We used linoleum nails and wood glue to secure the side accents in place.  Pilot holes were a necessity here. 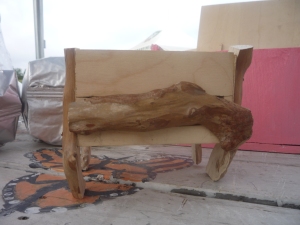 We are about two and a half months in now.  Final sanding and finishing takes two weeks.  The student used diluted Minwax Polyshades, the Bombay Mahogany flavor. 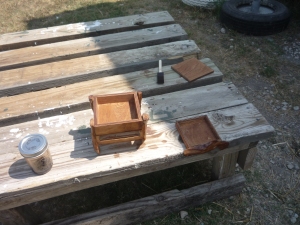 A coat of paint on the underside and plywood edges as boom factor, a coat of poly on the painted areas and the box was finished.  Just in time for Mother’s Day. 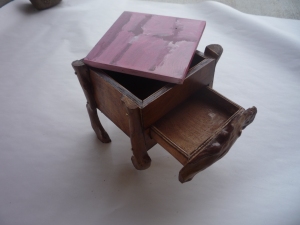 One thought on “This Week In The Shop: Jewelry Box”

Have a Question? Want to Talk Shop?